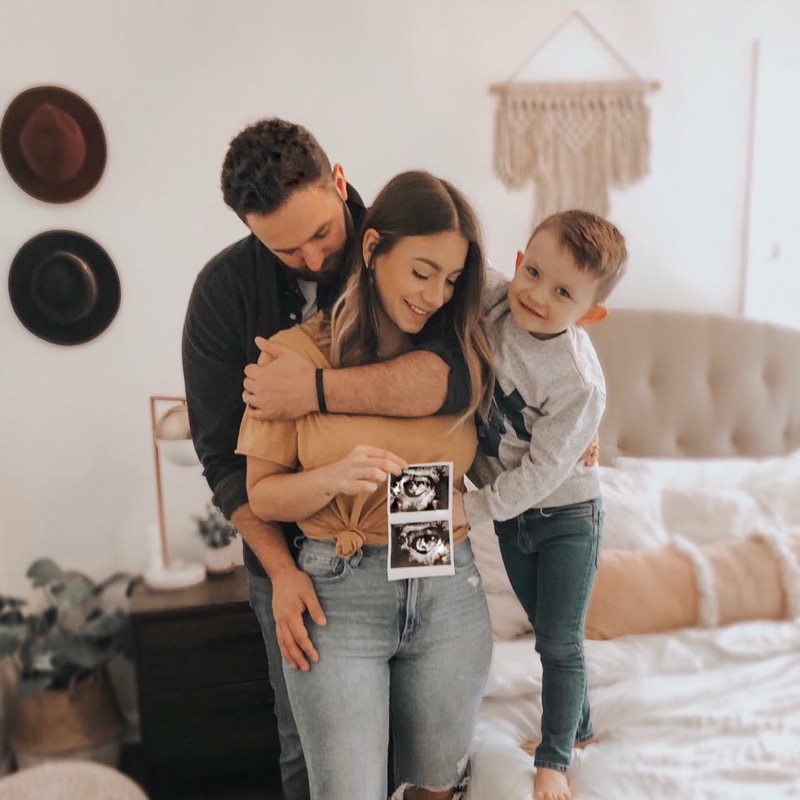 So excited to share with you that we are expecting a new addition to the family! I’m thrilled to finally be sharing the news with you guys because it’s been tough keeping it a secret for so long! Thank you ALL so much for all your sweet comments in my latest instagram post! I appreciate all of your love and support during this exciting time for our family!

Today, I’m 12 weeks pregnant! Honestly, I can barely believe it.  It feels like yesterday that I was finding out the news, but at the same time, I feel like I have been keeping this secret for so DAMN long!  Now, we can finally scream it from the mountain tops! This pregnancy has been so special for us as we have been trying for a while now, so to finally get the news was such a gift for our family!

I don’t think I have ever shared with you my journey with my last pregnancy with my son, Parker, which is quite different from this one! One day when I get the courage, I will write an entire post on my journey with my first, because it’s definitely a story to be heard. Just to give you a fast forward version of my last pregnancy, I did not find out I was pregnant with Parker until I was 19 weeks pregnant. I carried a lot of guilt on myself for not knowing, and it was a very difficult pregnancy.  But it was all SO worth it, and Parker is my little miracle man. I couldn’t imagine life without my precious boy. But from not knowing with my first pregnancy, to knowing so early on this time around, makes things a bit special for me. I am so excited to experience 19 weeks of the first trimester that i didn’t necessarily get to “have” the first time around, and for that I am forever thankful.

Today, I’m sharing with you everything from how I found out, to Bob & Parker’s reactions and a little bit about my first trimester!  Enjoy!

How I Found Out

We had been trying for a while now, and honestly I was quickly getting over the fact that it wasn’t just happening and kind of felt defeated.  Bob and I were at such a different place when we were pregnant with Parker, and I had just assumed it would just “happen” again. This time was a bit of a struggle, and not so easy.  It’s hard not to get in your head, especially when so many people ask you when your having another, and you truly want one and are ready for one, but it’s just not happening. But once I really “stopped trying”, is when it happened for us.  It’s much harder than it seems, but if you are currently struggling getting pregnant, do not give up! I am rooting for you!

Unlike my first pregnancy, I KNEW the day I got pregnant. I remember having dinner at my mom’s and saying to her and Bob, “I think I’m pregnant!”  They both laughed because my period wasn’t due for another few days, but my boobs hurt SO bad and my skin was GLOWING which were red flags for me.  I always get acne right before my period starts, so I knew something was off!

Bob knew I was taking pregnancy tests left and right for the past year and a half that we had been trying on and off, so he told me to wait until I missed my period before I got too excited.  It was New Year’s Eve, and as soon as I got to work I had this weird feeling and just HAD to take a pregnancy test, you know just to make sure I didn’t drink that night.  When I was pregnant with Parker, I had taken 4-5 pregnancy tests which were all negative, so I didn’t even think a pregnancy test would WORK, but I wanted to try just to be sure.

I happened to have two pregnancy tests from the Dollar Store (please don’t judge me!  I’m giggling as I write this, as it sounds so ridiculous, but my friend swore by them, so yes I bought a few and kept them in my desk drawer.) I peed on the pregnancy test, and without even waiting 2 seconds, the bold pregnancy line appeared. I could not believe my eyes, as i thought pregnancy tests just didn’t work for me, so I instantly thought it was a mistake.  My period also wasn’t late yet, so I just wasn’t processing that this was really happening!

I always pictured myself getting a cute little box and surprising my husband with the “I’m pregnant” or announcing it to him in some kind of cute way that you would pin on Pinterest, but that did not happen.

I face-timed him right away, seconds after finding out in the employee bathroom, with tears rolling down my face jumping up and down. He couldn’t believe the news, and instantly started crying with me as we were both so happy for the wonderful news!  His next words were, “Wait, now you can’t drink tonight, how are we going to hide this?!”  We had never found out this early before, so this was such a special way to find out we were pregnant so early on!

We were a little hesitant to tell Parker, because let’s be honest, this can sometimes be a kid’s worst nightmare!  We wanted to be proactive and do a little research and talk to our friends with siblings beforehand to get some tips before delivering the news, but we were both pretty terrified at how he was going to react.

Our good friend who has a son the same age as Parker came over for a play date, and they just had another baby.  She brought the baby over, and after our friends left, Parker randomly brought up the subject about being a big brother. It magically seemed like the perfect time to tell him. I said to Parker, “What If i told you there was a baby inside my belly, and that you were going to be a big brother?!” I have never seen his eyes light up the way they did, and he couldn’t believe it! He put his head on my stomach, and told us he wanted to name the baby “Pippa” if it was a girl and “Junior Parker” if it was a boy! I think he was a bit confused that i didn’t have a belly yet, and he had a LOT of questions, but Parker approved!

This first trimester has been a rough one to say the least! I have been sick on and off, and I have been getting morning sickness almost every morning! I am hoping now that we are entering the second trimester that it will be a bit easier! My bump is here, and showed up much earlier this time around, but a lot of people say this happens earlier with your second, as your body is used to going through the motions. I am currently craving ice-cream and ALL the raisins!

We are due early September 2019 with our sweet babe, and we are so excited to meet our newest member of the fam! Feels so sweet to know so early, and I am just trying to soak up every moment of this journey!

Social Media Enthusiast fueled by lots of coffee. I'm a small town girl, living in Upstate, NY! I'm a mom to the coolest six year old named Parker and little babe, Sloane. Most days you can find me in converse and a graphic tee, hanging with my sweet fam!